Go to my Site

Be sure to check out my full site: click here

What to do with Dzokhar Tsarnaev

This is a question going around and here is my opinion.

First and foremost, he is a citizen of the United States.  Yes, sorry, I still value that status and wear the label proudly.  We made him a citizen; we all shoulder the burden and responsibility of his status.  With his status come rights.

What do we do with terrible horrible criminals in the USA?  We treat them as we treat any other bad person in the USA that is a citizen criminal..  From all accounts, I think this guy is one bad dude.  He should, if found guilty, receive the maximum penalty under the law.  Remember, we are still in the USA and as such I always thought the courts, judge and, if applicable jury, made the determination.

We, in the USA, also have this Freedom of Speech concept.  I find it interesting the media has appointed themselves the judge, jury and court system.  I'm disturbed at how easily they are willing to sacrifice the rights of US citizens when they, in the media, determine it to be an acceptable practice.  I'm disturbed that a US citizen that ends up being a horrible criminal can be labeled an 'enemy combatant' and loose their rights as a US citizen.  If this guy is found guilty, he is a criminal, our criminal.  If there is a connections to radical groups, let us go after them, also.  The media is acting like a lynch mob from the Old West, not pretty.

We cannot try to shift the blame to others.  He's one of us, a US citizen.  If he's found guilty, then we made a  huge mistake allowing him to become a US Citizen.  Hey, looking into the past always provides a better picture.  We made him a citizen looking forward not knowing he might now be the criminal we suspect him to be.  Do I agree with all the policies that brought him here and enabled his citizenship?  Answer = No, but that is an additional topic not related to this discussion.

A final comment, I hope there is a huge increase in gun sales in Massachusetts and that people realize that they have the right to protect themselves.  I saw a bunch of people thinking the military and police were protecting them when in reality the residents of the area were the first on the scene and needed the ability to protect themselves and their families.

I hope this suspect is the one.  I hope the criminal is brought to justice and receives the maximum penalty.  I hope there is not a connection to a deeper network of terror.  I will remain hopeful, hope for the best; as a country we need to prepare for the worst, without going crazy and stripping US citizens of their rights.  To quote a t-shirt now on the market, "don't drone me, bro" for expressing my opinion.
Posted by Karl Monk at 8:37 AM No comments:

Two opposing points of common sense.  What is my position?

Do I support keeping firearms out of the hands of bad people, yes.
Do I believe the government will abuse power given to them, yes.

Because these points of common sense are in opposition to each other, I must choose a position.

I support less government control than more.  It is natural for those people, many who believe they have good intention, those who have the "dictator gene" as a part of their DNA, those who believe they know better how a free country should remain free than I...  These people say "trust me".  They say, "I will not support more control; this legislation will not lead to more legislation."  I wish I could believe and trust them, but it is not intelligent to trust people.  People make up the government.

Do I trust government, no.  The side effects of this legislation lead to more legislation.  Do I believe in the slippery slope?  Yes.  Do I believe the proponents of this current round of "common sense" want only this level of common sense?  No.  The anti-gun lobby is using incomplete and partial common sense to appeal to the general population.  The general public, less invested in the 2nd Amendment, just want problems to go away.  The less invested simply desire a fix to all evil in the world.  I, also, desire all the worlds problems to go away.  The problems do not go away.  Bad people exist in this world.  Bad countries exist; bad religions exist.

Be sure to check out Buckeye Firearms Association at  http://www.buckeyefirearms.org/ to see what is going on in Ohio related to shooting and concealed carry.

Gun sales are soaring...
Smith & Wesson reported record net sales of $136 million in the first quarter of fiscal 2013, up 48.3 percent from a year ago.

Enjoy your sport and protect your right to keep and bear arms!
Posted by Karl Monk at 6:44 PM No comments:

Well, what can I say...
He's joined a club of elite shooters.  A quick check of GSSF's site shows only 94(now 95) in the United States with this honor.

Andrew, the youngest son, shot two 500s on the same day in the GSSF Glock Indoor competition. Shot a perfect score first with a G35, .40 caliber and then followed it up with a G17, 9mm, perfect score.

Be sure to check out Glock Shooting Sports Foundation.  It is a fine organization promoting the shooting sports and a good time.

A perfect score is all shots in the 10 Ring, the shots scored in the X ring are for bragging and breaking ties. 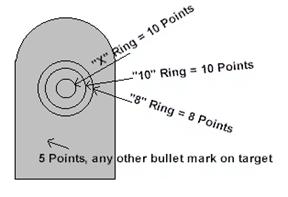 Walther P22 and which ammo will work?

I bought a Walther P22 a few months ago. Figured I better have a gun that would introduce a new shooter to the sport without intimidating them. John Farquhar from Mad Duck Training gave me this tip when I renewed my Instructor qualification through him. John's a great trainer and, as always, his advice is sound. You can check him out at www.madduckttc.net. (I'm not on his staff and don't get any money for saying nice things about him.)
This .22 caliber semi-auto grabbed my eye. It is cool looking, fits the hand well and has a nice wide rear sight. I especially liked the width of the rear sight for a new shooter. Of course, that width will reduce accuracy, but allows the new shooter to "pick up the front sight". Pinpoint accuracy is hardly a consideration for the new shooter. This isn't the gun you would buy for Olympic target shooting anyway, so no harm done.
I read (on the internet) that the gun might not work well with all .22 LR (long rifle) ammunition. I have experienced the same situation. Feed it the ammo it likes and perfection. Feed it ammo it doesn't like and poop, crap, bummer.
Ammo that works well in my Walther P22:
CCI Stinger 22 LR
- this long rifle ammunition features a copper plated hollow point 32 grain bullet traveling at 1640 feet per second.
- this ammo feeds flawlessly, extracts with no issues and ejects away from the gun as it should.
- the only think I don't care for is the bright white flash. This ammo really puts on a show when you shoot. You get used to it, but it just might surprise you the first time you experience the flash.
Ammo that does not shoot:
Note: I'm not saying the below ammunition is bad. I'm just stating it doesn't work in my P22. The ammo works well in my other guns. Shoots well out of my lever action rifle, shoots well out of my .22 revolver.
Remington 22 Thunderbolt
- this LR ammo consists of a 40 grain Lead Round Nose bullet traveling at 1255 fps.
- this ammo just doesn't have enough power to extract and eject the spent casing
- at times, when the casing does manage to clear the ejection port, it seems as if the slide isn't blown back adequately to enable the next bullet to be stripped from the magazine. You then have the pleasure of dry firing the gun (and vividly seeing if you are jerking the trigger or not).
Federal Lightning
- this LR ammo is also a 40 grain Lead Round Nose bullet which travels at 1240 fps.
- it experiences all the same issues as the Remington Thunderbolt
Remington Target, Standard Velocity
- this LR ammo has a 40 grain LRN bullet, 1150 fps
- it experiences all the same issues.
Summary
CCI Stinger 22 LR works great. The ammo goes bang every time and the Walther P22 eats it like candy. What more can I ask for. I might try a few more brands as the CCI Stinger is way more expensive that the other ammo, but I'm in no hurry.
Posted by Karl Monk at 3:28 PM No comments:

Several folks have asked me my opinion on this subject. Here they are.

The political three ring circus is a sad commentary and drawing in the premier clowns of our generation. You know who you are.

But let's get to the real reason people ask my opinion. I'm a firearms instructor and strong advocate for our 2nd Amendment rights. I'm not a lawyer.

I will not offer an opinion as to innocence or guilt. How could I? Only the media and politicians are smart enough to pre-judge. Since I believe in the constitution, I'll let the judge and jury do their job.

This isn't a matter of right to carry; 2nd Amendment rights or firearms freedom. It is a matter of understanding your environment and acting appropriately. Your environment is litigious, full of people who don't respect your right to own and carry and people looking for every opportunity to brand legitimate gun owners as crazy people.

If you want to be a cop, do it. There is no room for pretend police. You don't have the authority and support they have. No matter how good the shoot, even the police are subject to rigorous scrutiny, second guessing and public ridicule. Our police deserve respect for going in harms way daily.

Stand your ground is quicksand. The morons out there are attacking it. Do a google search and study a bit. I believe in the stand your ground laws. You should not have to "run for the wall" before protecting yourself. At the same time, you cannot provoke an incident, then stand your ground and claim self defense. wikipedia

No matter how the Trayvon Martin - George Zimmerman case ends, there are no winners. Martin is dead and Zimmerman's life is forever damaged. The only winners are the media and clowns.

DO NOT join a Neighborhood Watch group and carry a gun.
Posted by Karl Monk at 7:33 PM No comments: